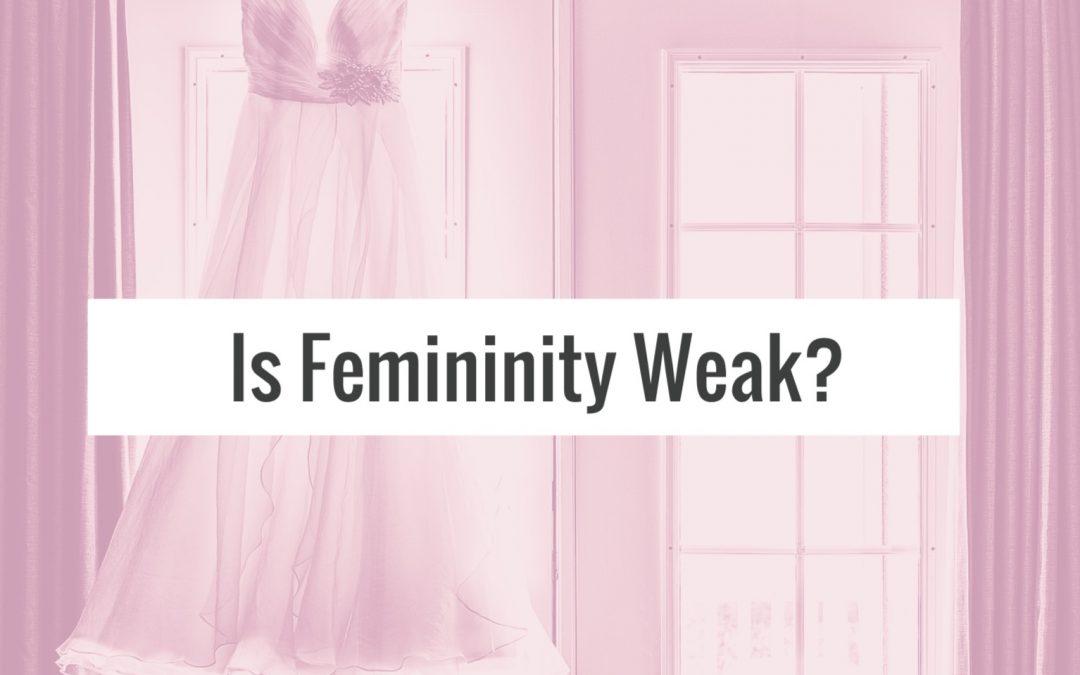 You’ve heard it said, namely by James Brown, “This is a Man’s World,”  and society, even our own culture,  would have us believe it.  In an age of feminism, one click to the Yahoo front page will prove every generation discovers some new injustice and double standard working against women.  For the record, I’m generally a proponent of equal opportunities for women, in education and employment, from the music industry to library science, but I feel that with every success for feminism, there is a loss for femininity.

In Elisabeth Elliot’s article, “The Gift of Femininity,” she quotes the Russian philosopher Bergiath who made this statement: “The idea of woman’s emancipation is based upon a profound enmity between the sexes, upon envy and imitation.” Doesn’t that sound familiar? This issue, like many others, can be traced back to the time when Adam and Eve strolled around the Garden of Eden.  Eve made a friend, and pardon the pun, but he was a snake in the grass.  Satan so deceived Eve that she questioned God’s original intention for her.  Eve’s thoughts may have sounded like this: Why would God not want me to be like Him? Surely, He wants me to know good and evil. I want to be as wise as God!  Eve bit off more than she could chew. In believing the serpent, rejecting God’s will in favor of her own, biting the fruit and sharing with Adam, sin entered into the world and man’s heart, changing the natural inclinations of mankind toward evil for generations to come.

War is proclaimed between the Seed of the woman and the seed of the serpent. It is the fruit of this enmity, that there is a continual warfare between grace and corruption, in the hearts of God’s people. -Matthew Henry

“And I will put enmity between you and the woman and between your offspring and hers…” Genesis 3:15.

I agree with Bergiath’s statement above. A great enmity exists, a perpetual war, one that would divide two kingdoms for all eternity, but I am no longer talking about a war of the sexes, “For our struggle is not against flesh and blood, but against the rulers, against the authorities, against the powers of this dark world and against the spiritual forces of evil in the heavenly realms” Ephesians 6:12. See, in response to man’s sin, God, in less than a sentence, set the course for war between Satan and Mankind and whether we are aware or not, we are a part of a plan, to which we are either collaborating with God or co-conspirators with Satan.

Satans’ many attacks on God’s people are strategic and his schemes will always attempt to pervert God’s original intention. One attack in particular is against biblical womanhood and femininity.  As a therapist, it didnt’ take me very long to pick up on certain patterns of thought.

1) Many women struggle in believing that being a woman means you cannot be taken seriously.

2) And that they will not be respected unless they emulate the character of a man.

And there you have it, the age old lie rears its ugly head again. Eve questioned the way God fashioned and created her, which left her feeling cheated, and women still think this way today.  Why is it so hard to trust God with the way he has created us? Why do we as women feel left behind? Allow me to share how I too had fallen prey to this lie.

I was raised by a strict Mexican father with extreme ideologies. I grew up believing that being born as a female was “less than,” as my father desperately wanted his first born to be a son; seeing I was not, he raised me as one.  Growing up my toys consisted of G.I. Joe’s  Transformers, and trucks, which from what I remembered, I thoroughly enjoyed.  However, as I got older and attended preschool and kindergarten, I began to notice certain things. Why did the girls wear colorful things while I had on my G.I. Joe sweat suit? Why did my tea sets and doll houses disappear the day after Christmas?  Without knowing, I was involved in some type of social experiment gone bad.  Since the day I was born, I was led to believe that being born a female was inferior, a mistake, second class, and I believed it.

Now, I am not writing this blog to incite debate on how toys influence stereotypical gender roles, but rather to highlight and challenge long-standing patterns or themes in thinking that have been promoted by our environment and launched by our adversary.  I carried this mis-belief concerning my gender into high school, into my time in the Marine Corps; which was reinforced, and consequently into the church once I came to believe on Jesus Christ at the age of 23.  In fact, I thought it was to be applauded that though I was born a female, I was capable of what most men could do. So much freedom of learning who I was as a person was ripped away that I had no idea who Vanessa really was.

After believing the Gospel, the first two years of learning and understanding God and His ways were like receiving the gift of sight after being blind for a lifetime. I was tired of taking on every new identity in hopes I would find me.  Everything I knew about being a woman was learned from parental modeling and influence, the culture in which I grew up in, and observation of other relationships. All I knew of a woman’s purpose were the common stereotypical derogatory remarks I would hear growing up. I’m sure you could think of a few. My only natural recourse was to fight back and prove, “Hey, I can too.”

When I first heard the term biblical womanhood, I was intrigued. Through a local radio station I had stumbled upon a series entitled Becoming a Woman of Discretion, the host Nancy Leigh DeMoss.  Soon thereafter I went out, bought some books and began to learn truths that would soon serve to recreate and renew my thoughts on being a woman.

The truth is, God created women to be feminine, therefore it is good. In John Piper’s article “The Ultimate Meaning of True Womanhood,” Pastor John shares that “The ultimate meaning of true womanhood is this: It is a distinctive calling of God to display the glory of His Son in ways that would not be displayed if there were no womanhood.”  So when a woman denounces her womanhood in favor of manhood, it will prove detrimental to the beauty of her calling under the umbrella of womanhood; marriage, motherhood, and the love and support of men.  Our adversary has tested and proved that if he can call God’s intentions into question, and we are deceived, he can effect man and in turn generations.  We save generations of women from confusion when we believe God’s word in how he has created us.

It is in your right relationship with God and His word that you will find your identity.  Take some time and think of what ideas, circumstances, or feelings have distorted your view of femininity, purposely give it to God, and be faithful in renewing your mind.

“To me, a lady is not frilly, flouncy, flippant, frivolous and fluff-brained,

but she is gentle.

She is gracious. She is godly and she is giving…

You and I, if we are women, have the gift of femininity.

Very often it is obscured, just as the image of God is obscured in all of us…

The more womanly we are, the more manly men will be,  and the more God is glorified.

As I say to you women, ‘Be women. Be only women. Be real women in obedience to God.’”

Did this post impact you? Let us know your thoughts. We love to hear from you!

Recommended Books to Further Your Study of Biblical Womanhood: